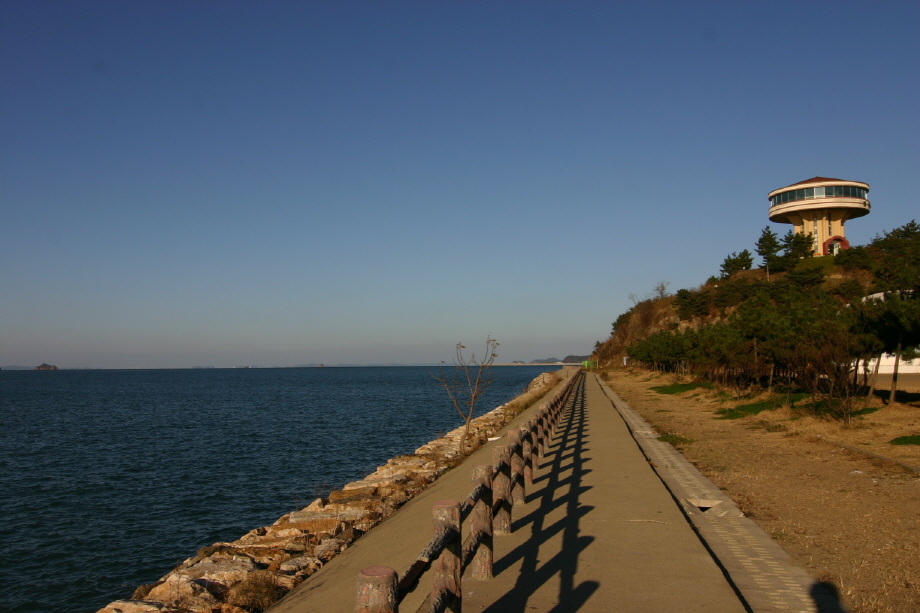 Dobido, which became part of the inland following the construction of Daeho Embankment between Dangjin and Seosan along a 7.8km shoreline, is where you can experience what it is like to live in a farming and fishing village.

About Marine Experience on Dobido

A place where visitors can enjoy farming and fishing experiences

Prior to the construction of Daeho Embankment, Nanjido boasted stunning scenery as an archipelago comprised of 9 islands. One of these islands that was nearest to the inland became part of the inland with the formation of a reclaimed land area resulting from the construction of Daeho Embankment. It’s none other than Dobido, which is characterized by coexistence of diverse natural ecosystems including the marine, terrestrial and wetland ecosystems. With its unique ecological characteristics, it attracts numerous visitors who want to experience what it’s like to live in a farming and fishing village at the same time.

On the shore of Dobido, you will be able to witness the parting of the sea, revealing the tidal flat underneath, at low tide, similar to Muchangpo where the parting of the sea is reminiscent of the “Miracle of Moses (Crossing of the Red Sea).” During the ebb, you can walk far along the tidal flat toward the sea, and catch and collect various marine creatures such as clams, crabs and octopus that you only got to see at seafood markets. On weekends and holidays, Dobido becomes crowded with families with children from cities, who want to learn how the diverse sea creatures live in the natural environment and how to catch them.

The eastern part of Dobido is a reclaimed land area created between Seongmun-myeon of Dangjin and Daesan-eup of Seosan. Around 801ha area of the 3,480ha of the basin area has been designated as a pilot environmental agricultural zone, and it is considered an emerging ecological repository. The rice paddies, which are regarded as a secondary habitat, plays a supplementary role for reclaimed wetlands and rivers, In winter, migratory birds come to the agricultural zone due to the abundance of prey.

If you want to understand the diverse ecosystems including rivers, streams, wetlands and farmlands and learn about the food chain, cycles of energy and matter, wild plants and animals, and aquatic insects, then we suggest that you visit the Dobido Agricultural Experience Center. In winter, you can observe migratory birds, and from spring to fall, you can participate in a farming experience program and learn about the eco-friendly farming methods that involve the use of loaches and freshwater snails. Also, from spring to fall, you can enjoy the splendid scenery at the ecological park of Dobido, where you can take part in an ecological experience program to learn about the wetland and rice paddy ecosystems.

Dobido is arguably one of the best places to enjoy the beauty of the sea and land, with an extensive reclaimed land area in the east and the vast sea in the west.

Dobido, the Mecca of Marine Recreation in Dangjin

Dobido, which has transformed into a “live eco-friendly farming education center” and an “exchange center for the residents of urban and rural areas,” is also considered the Mecca of Marine Recreation in Dangjin, where people can enjoy marine tourism and recreational sports. There is an observatory, ferry dock, sculpture park and various other amenities in the area, and it offers a spectacular view of the sea and an archipelago.

Visitors can enjoy diverse experiences at sea and on land, and taste the true joy of marine recreation at the bedrock seawater bath. Seawater bathing helps eliminate wastes from the body through the osmotic effect in addition to providing physical therapy for the body pores and medicinal effects. The seawater is rich in various minerals that are beneficial for the body including calcium, magnesium, potassium, iodine, phosphorous and zinc, and has the same positive effects as a hot spring bath.

The highly nutritious and delicious local cuisine of Dobido

Dobido is also known for its wide range of delicious local foods. There are 9 restaurants in operation in the tourist complex that offer various types of hoe (raw fish) and local foods that tantalize the taste buds. The shoreline of Seongmun-myeon, where Dobido is located, boasts a large wild oyster production volume.

As a producer of oysters, Dobido has many local dishes where oysters are the main ingredient including gulbap (rice with oysters). Gulbap, made with ginkgo, pine nuts, ginseng and jujubes, is seasoned with a wild chive sauce. It is considered an invigorating food that boosts the immune system, and it is one of the most popular dishes in Dobido. 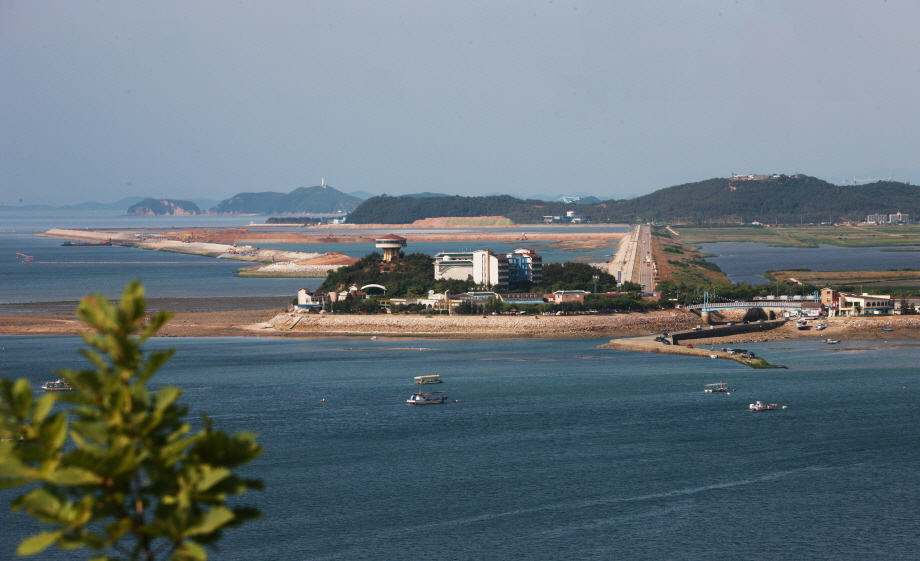 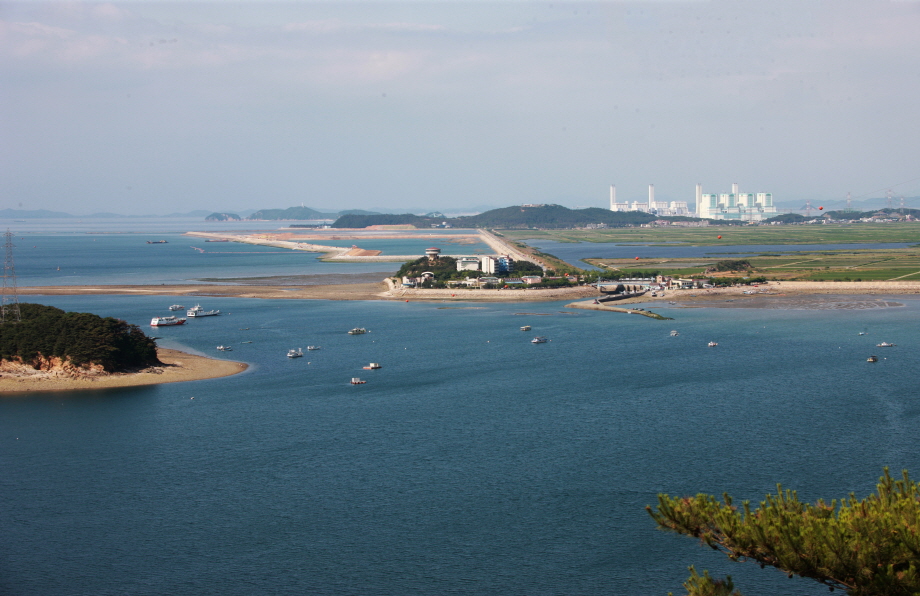 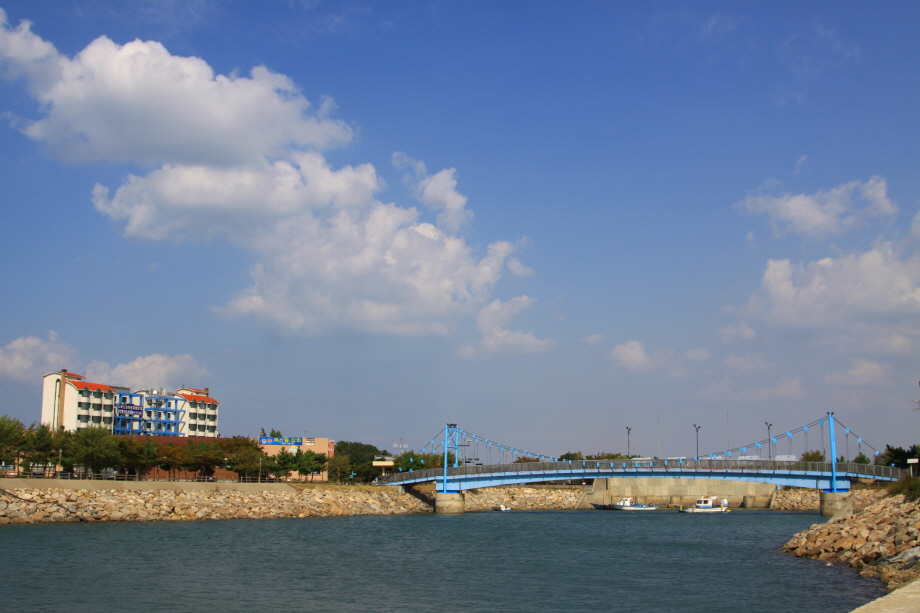 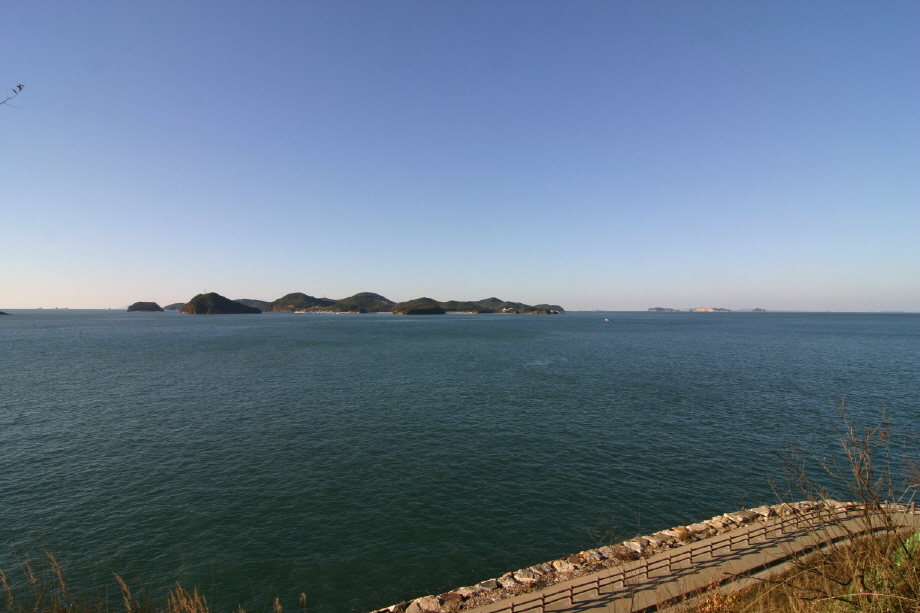 There are diverse travel programs being prepared on Dobido. There are a wide variety of fishing programs including saltwater fishing from a fishing boat, seated fishing at Gadu-ri Aqua Farm, fishing on the rocks of the shores of Dobido, fishing in front of the floodgates of the embankment, and freshwater fishing on the wetlands or river along Daeho Embankment. Also, visitors can explore the marine environment from a cruise, or engage in water sports at Nanjido Beach in the summer.
There are numerous other experience programs such as mud bath, making a scarecrow, a marathon along farm roads, archery, running along the embankment, inline skating on the embankment, and caching grasshoppers or dragonflies. In addition, there are programs that are organized in connection with the local festivals hosted by Dangjin.

Name to be entered into the GPS system: Dobido